With the amount of escape rooms we’ve been playing online and virtually, we thought we would have a chat with Floyd from Room Escape Southend about what its been like to set up award winning escape rooms,  How they are coping with the pandemic and everything in between.

Please could you tell us a little bit more about yourselves.

My name is Floyd and my business partner and Husband is Wayne. We have been together for 14 years, married with two dogs and both work to much at the escape room haha. We love anything horror or scary. Halloween is our favourite time of year followed by christmas. We live in Essex in a small ish town but we love it here.

How did Room Escape Southend come to be?

My partner Wayne booked an escape room as a surprise birthday outing while we were in London for my birthday weekend. It was something that we had not done before but it was horror themed and we love a good scare. We enjoyed the escape game however something was missing, the scare element. As much fun as it was, we were expecting a jump or two. I think for me personally what put me off is the actor who wasn’t suppose to be alive spoke to me to let me know something, which I had already solved (breaking character and the illusion of the room and feeling). At this time we were both part owners of a school and an activity centre with a passion for acting on stage within a local theatre group. After a business birthday weekend and a couple days of resting, Room Escape Southend was born.

What it is like to design and create and then run the rooms? the whole process as it were.

We love to build and create a set and design and surprise our customers but on the other hand, the day that the room opens, all eyes are on the camera watching our customers play, checking everything, looking at their reactions and making sure there is still a wow factor. It can be hard as everyone is different and we are not going to please everyone. For example, we recently did a full UV escape room. Most customers loved it, everything from the ceiling to the floor, props to the puzzles were all UV. We did have the odd customer say its to dark and want to use a torch which would ruin the whole aspect of a UV room.

Out of all the rooms you’ve done, which one stands out as the most fun you had to create and which one was the pain in arse?

THE CABIN is a joint favourite. It was our biggest budget we had and it was an amazing set. We created a log cabin with multiple rooms and a garden area as well. The waiting room was themed to match the cabin so when customers arrived they were in a living room area off the cabin and then suddenly the game started. For our newer members of staff their favourite is The Chapel. It was one of our scariest rooms and very hard to move in the pitch black but a lot of fun to scare and host.

The worse room to build was our Haunting on West street – we wanted a completely different layout and wanted it to look like a house. it looked amazing once finished but even just typing about it brings back annoying memories, from covering walls in brick slips (which takes forever by the way!) to building a climbing frame inside a wall so we could be sitting on the ceiling in a room to then it not fitting and being a total waste of time.

As it’s pride month, would you ever create a room with an LGBT+ theme or storyline?

About 75% of our rooms have had LBGT nods or references within however a full LGBT+ themed room or story line, sadly no. As LGBT+ owners we include everyone and ensure all story lines can be excepted by all ages and customers as well as being understood. We have had a storyline with a LGBT+ character but this is as far as we would go. We understand that everyones views and acceptance is different and feelings towards LGBT+ is becoming more accepted however, we also believe that we are all the same as each other, and creating a said theme is creating separation instead of inclusion so we do not feel a need to create a LGBT+ theme or storyline. As mentioned we have mixed a storyline or character that has an LGBT+ background into a theme but not made it the main focal point. 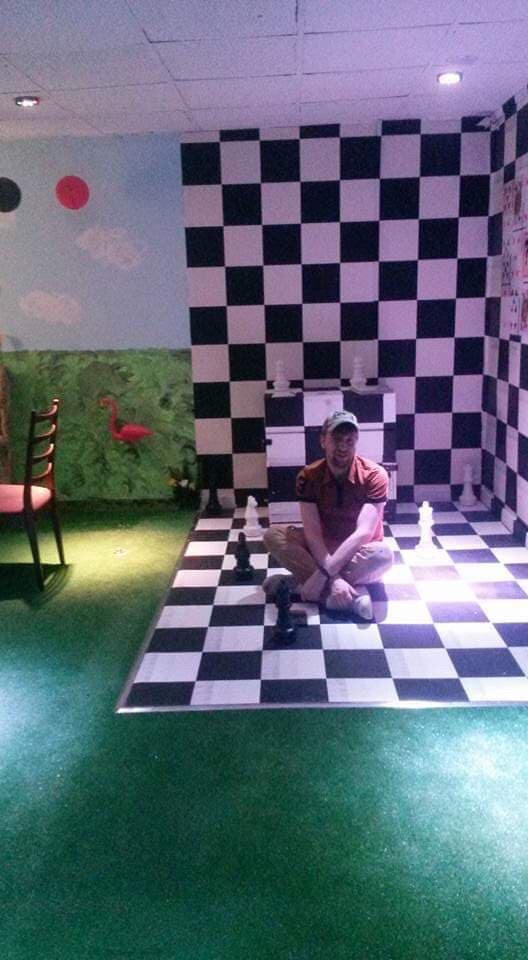 Obviously the current situation is the elephant in the room so I guess my next question is how has the Coronavirus affected you guys?

At first we were worried however we have adapted like many others and its great to see the love and support for virtual escape rooms. We have started being more mainstream with our rooms however we do have two scary rooms in the works and cannot wait for them to be launched for the public to try. Personally I am slightly worried about coming out the other side and will customers want to attend, however we have plans in place and training set ready for when we are allowed to open.

Do you think you will continue with the online escapes once everything calms down?

Yes. One of our plans is to have less staff at the escape rooms however we do not want to loose our staff. we currently have 3 escape rooms that are virtual and will be moving them to our staff that we won’t be able to have come back. This way we are looking after our staff and not making them unemployed but also keeping our virtual rooms active as they are a lot of fun to host. 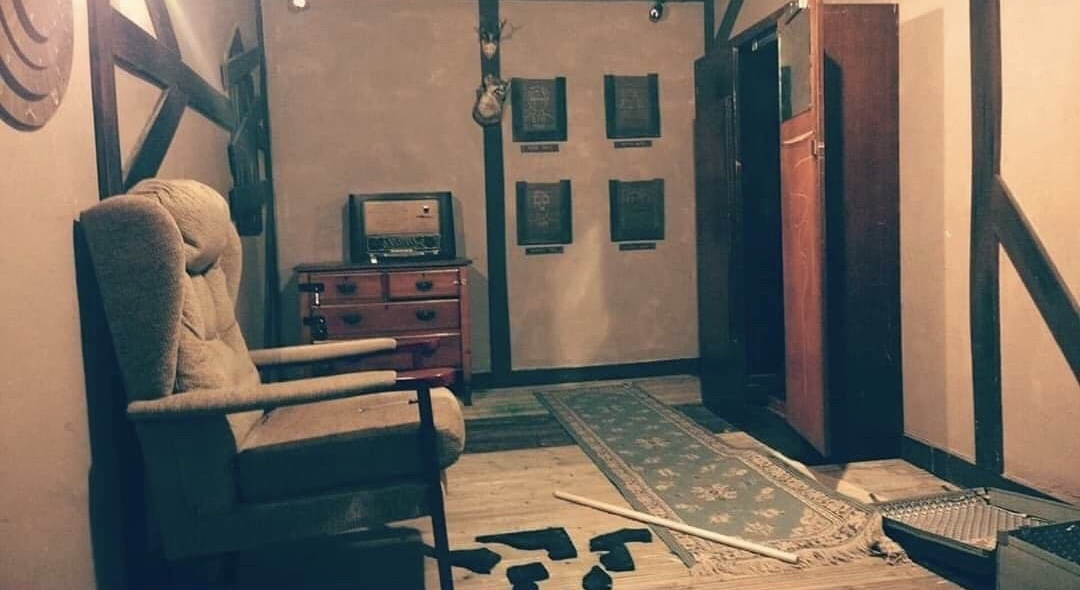 What’s one of the most memorable moments from running the escape rooms?

We have three that always stick in our mind. When we were told we were nominated for Asylum themed escape room by ScareCon and then WON (this was within our first year of being opened) it gave us a great sense of accomplishment and a feeling that we are doing something right to be recognised by them. We attended for a laugh not thinking for a moment we would win at all. The live video that recorded our win is just embarrassing!

The seconded most memorable moment would be our interviews for our staff when we opened our doors in 2016. It was very important to us that we had staff that were not just good at acting but can deal with any situation as lists of escape companies and horror parks would agree there are many moments that are unplanned. We asked 20 people to attend and they were required to attend as the undead. Many did some amazing makeup and really thought about it some, not so much. We than after having a group chat and talking made them aware that they will now walk from one end of Southend high street, all the way down to the other and must not break character. This gave us a more real view of their skills and how they dealt with the public. (We ended up on the radio and in the newspaper due to this, many of my friends showed me videos from Snapchat and Facebook videos were people were refusing to leave shops as there was a zoo bit attack – sorry I’m laughing now while typing this) but publicity helped us when we opened!

Third memory would be expanding. Our wish was to expand and grow the company and after 3 fails of expanding (getting keys then being let down, council refusing change of usage etc) we finally found somewhere that was on a high street – affordable and has really kicked off room escape Southend.

What would you each say is your favourite room you’ve done?

Wayne’s is The Cabin as mentioned above. Mine would be Apartment 666 as it looked like a normal apartment but then when the lights change, ooo so different. For most of our staff it would be a toss up between the House of Frankenstein and The Chapel. Both very different in scare level but so much fun to host and scare in.

It’s been mentioned by the lovely guys at Cursed that you were teaming up for something for this Halloween. Other than the fact it may not happen because of Coronovirus and the uncertainty towards Halloween, is there anything you can tell us about the plans?

it will be a customer choice option. all we can say is that there is 3 doors, which they choose depends on the theme and the scare element inside. it all depends on what they complete in the 1st room. Think the film – Cabin in the Woods.

If the rooms you had planned are to open eventually, which one are you most excited for?

autopsy and the temple of doom. sadly the temple of doom will not open this year and will be postponed however the autopsy theme was a customer request and we have so many amazing ideas we are all excited for this so much. We are also excited for both the toy shop and our space theme room for our non scary. Both of them are themes that we have never done before. the toy shop again was a customer request but the space theme is so different we had to do one. very excited for both. 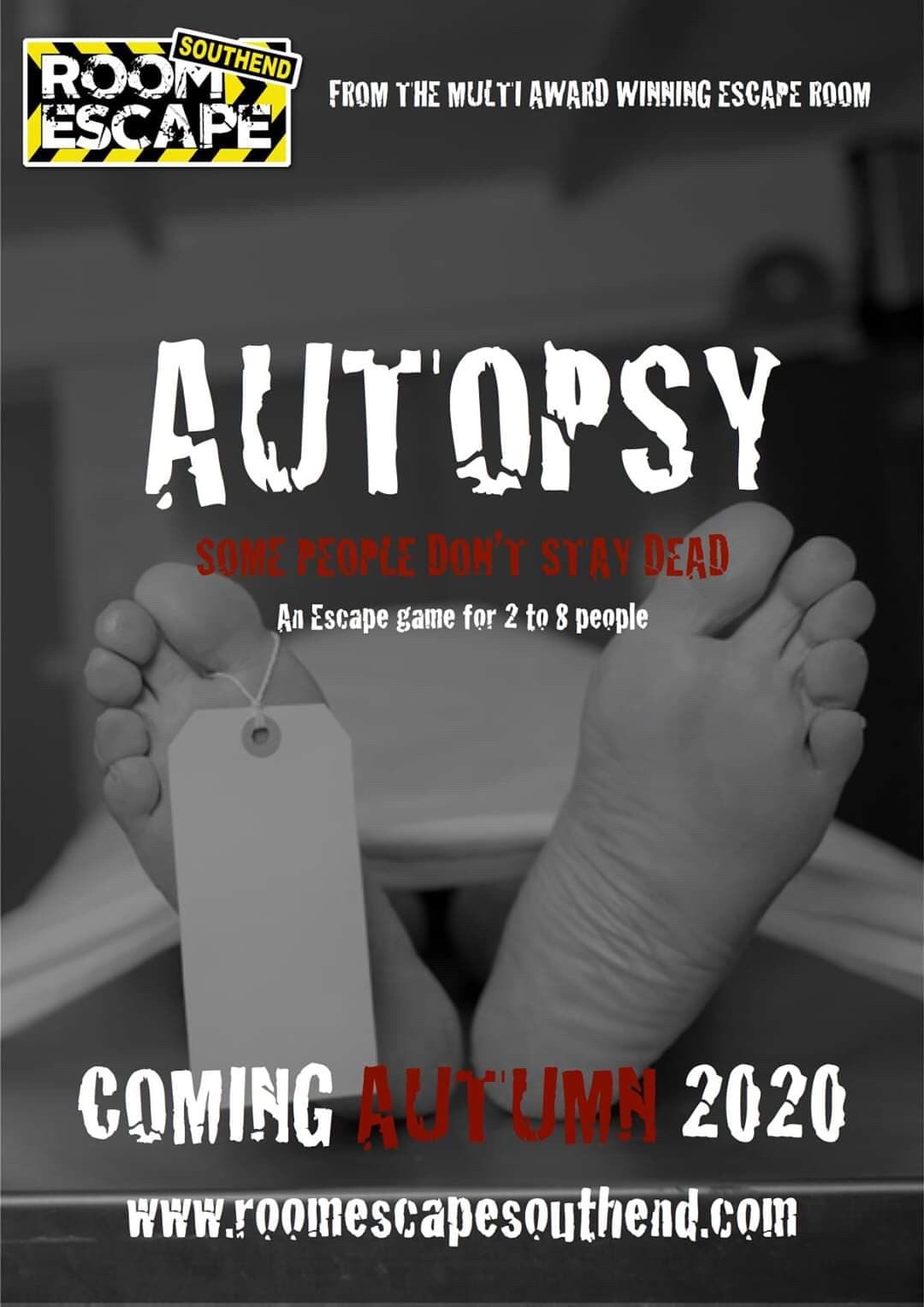 We’d like to say a massive thank you to Floyd for giving up some time to answer our questions. We just want to add that these guys are so lovely and their whole team are so welcoming and friendly. Every visit we have had there has been filled with joy and fun and we cannot recommend them enough for escape room lovers and scare lovers. For more information on the rooms they currently offer can be found at Room Escape Southend’s website or alternatively check them out on their Facebook, Twitter and Instagram.

(All Images with thanks from Floyd at Room Escape Southend)