The LGBTQIA+ community is full of such a diverse mix of people that sometimes its hard to fully understand everything. Luckily, the community likes to help and many types of person can be represented by a flag, so we thought as a way of kicking of our Pride Month celebrations, we help educate you about the flags of the LGBT+ community.

I’m not sure I got the name of this one correct as its only just started to appear in the past couple of days but with all the recent riots and the #BlackLivesMatter movement educating everyone, a new flag came to light to support the LGBT+ Black Community. This flag represent a united front of LGBT+ people against all kinds of hate, but especially Racism! 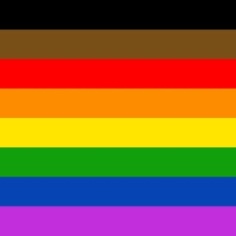 Lets start with the what is probably the most familiar one. The Gay pride flag has become such a iconic symbol of the entire LGBT+ community, but did you know there have actually been 3 versions. The one on the left above is the one that everyone knows, but it only became that because it was hard to get the pink and turquoise colours for the original (Pictured Centre). The original design actually had 8 colours. In 2017 a campaign group called More Colour More pride added the brown and black stripes (Pictured Right) to add representation for people of colour. Most people tend to stick with the recognisable 6 striped flag.

The Bisexual flag was designed in 1998. It was designed to give Bisexual people a real sense of belonging and community and acceptance. Michael Page, who designed the flag, designed it in such a way that he wanted the purple stripe in the middle to blend well with both the pink and the blue, similar to how bisexual people are able to mix into both the straight and gay communities.

The Transgender flag was created in 1999 by Monica Helms, a navy veteran who came out as trans in 1987. The blue and pink represent trans men and trans women and the white stripe is to represent the non-binary in the community. She came up with the flag when she met Michael Page who suggested that the Trans community needed a flag too.

I won’t lie, I didn’t know this flag really existed until I went looking for images of the flags. It came to be in 2018 when Daniel Quasar redesigned the flag. He identifies as queer and non-binary and felt the original pride flag wasn’t as inclusive as it could be. He wanted to have every represented on one flag to reflect the entire community. 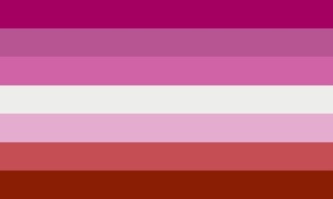 For anyone who doesn’t know, Intersex means a person who is born with variations in sex characteristics be it chromosomes, genitals and who do not fit the typical definitions of male or female.The flag was designed by the group Intersex Human Rights Australia in 2013 and as you can see the flag stays clear of the traditional gender colours like pink and blue. The circle represents wholeness and completeness of personalities.

Polysexual is a term used for people who are attracted to two or more genders, but not necessarily all of them. It is also used as an umbrella term for bisexual and pansexual people, but most polysexual people will identify as polysexual instead of pansexual or bisexual. Like with the other flags, the strips have meaning. The pink represents an attraction to women, the blue to male and the green to people of other genders.

The Polyamorous flag was designed by Jim Evans and is used to represent polyamory. Its a term used to describe people who have open relationships be it sexual or romantic with more than one person at a time. The blue stripes represent honesty, the red – love, the black – the fight against discrimination and the pi symbol in the middle is the first letter in the greek word for polyamory as well as meaning emotional attachments to people. 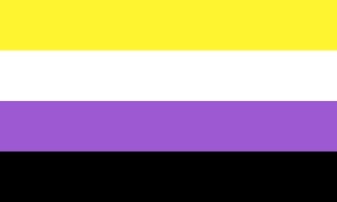 The non-binary flag was created in 2014 by Kye Rowan. Non-binary is a term used for someone who doesn’t identify as male or female. The flag, like the others has meaning. The yellow stripe is for gender seperate from the norm. White is for those with multiple genders, purple is for those who are a mix of male and female and black is for those with no gender.

Genderqueer is a form of non-binary and it was given its flag in 2011 by Marilyn Roxie. Lavender represent androgyny, white represents agender and green represents the other non binary identities.

Another flag that is a form of non-binary, the genderfluid flag represents all those whose sexual identity can shift. The pink in the flag means femininity, the blue masculinity, the purple for both, the black for lack of gender and the white is for all genders.

This flag came into existing because the LGBT+ community didn’t want anyone to be left out at pride. It means someone is straight but they actively support the community and are basically a huge ally to the community 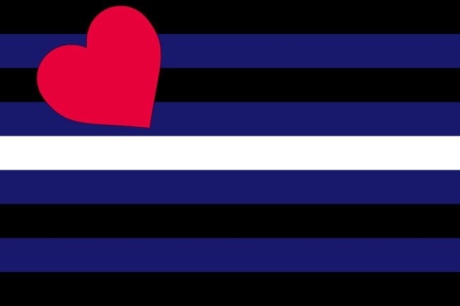 Even in such a welcoming community, there are sub culture of different types of people. Flags representing these smaller such communities always appear at pride events. The flags represented above are Leather pride, Twink pride and Bear pride. We decided to include them in this list as they appear regularly at pride events!

Yes, there is such a thing as straight pride. There is only one reason we have included this abomination on this list and that’s so people are aware it is a thing and why Pride is still so very important.