So after a quick drive from Bristol to Shepton Mallet and after going down all the small winding roads, I found myself in a car park outside the old workshops of the prison with these big walls and barbed wire surrounding it. It’s an impressive building and its worth noting early, it used to be home to actual prisoners. It was not long after I arrived that we were all called/waved out of our cars by our host and he greeted us. He would be our host for the evening and explained the rules and health and safety of the event. It was also here where you could upgrade your weapons if you wanted and also where you coul by a T-Shirts for the event. An added bonus/extra of this T-shirt was that it meant the zombies would really go for you with full contact, so of course I could not resist this opportunity as I was feeling brave before I entered the building haha. I was the only one in the group who did this. It was so worth it for me and really added to experience of running for your life.

So after all of that, our host took us in, set up the intro and then left us. The basic story for this is “We were at Harvertech’s top weapons workshop at the ultra secure Shepton Mallet Prison base in quarantine sector Delta. Guests are invited to a tour this top facility and witness just how Harvertech’s finest are working hard to combat the virus as it grows in strength and number! But not all appreciate the “hard work” that Harvertech are doing… Do they have just cause…You’ll have to make that choice…? But you don’t have time to pause for breath…You’ll have to make a tough choice that will dictate your own personalized story… Will you fight alongside a post apocalyptic group “The Old Fashioned” or together with the worlds new order, Harvertech’s finest “The Mad Dogs”! Playing its part in the “Zombie Infection Universe” This is the first of its kind for ZI where you’ll have two paths to take. Which you choose is up to you!”

The next two hours were absolutely action packed. A lot of running, scares and being chased and shooting zombies. We were on our tour of Harvertechs latest facility and it soon got abruptly halted and we found ourselves fighting along with The Mad Dogs and the post apocalyptic group ‘The Old Fashioned’ Again when they come in they cause absolute chaos and you’ve no idea what’s going on. They let all the zombies out and you find yourself running through hordes of them to get to safety and holding/shutting doors on zombies and holding the hordes back. They were incredibly determined to get to us. Then all of a sudden the mood absolutely changed and we had to quickly make a split second decision on who’s side we were on! I absolutely loved the way it was done. It’s done to perfection and you have seconds to decide who to stand by! I chose to be on the Rebel side. Then we had a mission to complete. We were we all split up into smaller groups and explored the whole 3 floors, But we were mostly definitely not alone! The zombies were free and absolutely wild and savage! The first room we get to we saw the one zombie you can’t kill. He is called Progen 5. He was big and in a gas mask and white suit! There was also one we could shoot. We found ourselves locked in a holding bit surrounded by both. This room was brilliant and terrifying and that, along with the basement. It was so scary down there. The zombies would come out of no where. Then all of sudden we found ourselves facing off and shooting the horde of zombies down! And running for our lives to freedom! 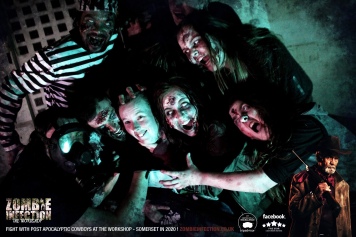 This venue is amazing. It was light-ish when we started but it soon got incredibly dark in there! It was pitch black in places where their was no lights. This meant the zombies could come from no where and they really did. I screamed so much in here, especially when a zombies appears in a room where you thought they could not get in haha 😂 and im 100% sure a certain zombie kept following me. Where ever I went they were damn well there! In one event, never have I had to shut so many doors in zombie faces, shut myself in rooms or screamed as loud as I did. I even told 15+ people to be quiet, don’t make a sound and suck up the darkness. I was at points laughing, being bossy and then running for my life, the zombies were relentless! Our rebel leaders were awesome and got everyone evolved and were fantastic and the zombies were crazy, more so than The Courthouse location, must be the country air lol.

I absolutely loved this event. It was all incredible and awsome. Everyone you met, saw or interacted with made you feel part of it. The story was told beautifully and the zombies and scares had me out of breath and shaking with fear. I must add, after the end of the event you get a photo with the cast of zombies. I won’t lie, I’ve never quite been as scared as I was about this. As I approached the group of zombies they got incredibly excitable and louder as I kneeled there in front of them. The guests I did the event with, their faces looked scared for my survival, with them saying yikes god help you. The host taking the photo looked scared for me haha. Then as soon as he shouted get her she’s on her own, I felt the force of them all grabbing me, strangling me, you can only just see me in the pictures! It’s spot the Amber within the zombies! They were after me, I even had blood on my face and in my hair. I could not move lol It was brilliant. Then I had loads of selfies with my absolute favourite zombies from the night 🖤🧟‍♀️

Loved this event. I was buzzing for days after it and on the way home. Thank you to the cast, crew and actors of zombie infection for an absolutely amazing night it was so good.