It was recently revealed via a social media image posted by @AmitymediaTP on Instagram that Saw Alive is leaving the park. The image showed the logo on the side of the Thorpe Belle being painted over. No official comment has been made from the resort yet about the attraction officially closing, but we think it’s safe to assume it won’t be coming back this year as part of Fright Nights. This is truest sad news.

Since 2010, Saw Alive has been part of the Fright Nights line up at Thorpe Park. It’s story and layout have not really changed over the 9 years it operated, but this didn’t detract from the scares and smells this attraction offered guests. You travelled through various scenes from the movies, getting the chance to visibly see the disgusting and bloody games that Jigsaw plays. From the infamous bathroom scene, to the shotgun roundabout, these scenes brought to life the movies.

A quick run through of what happened. You entered the attraction and were told the does and don’ts and then it was picture time with Billy. After that you would be told to enter the next room. Here the actor would build the tension and make a guest push the big red button. This always caused panic as the person pressing didn’t know what the button did. It only made the televisions turn on which explained the story. You then entered the first scene, the infamous bathroom scene. The bathroom scene was dimly lit with a strong smell of poo and blood. The actor in here would bolt at you from various positions and sometimes there was even two. After the bathroom scene was the electricity room. This was basically just a chain link corridor with some big metal gates, a vibrating platform and that maze favourite, a strobe. After this was the freezer where a victim of Jigsaw would be tied up (Usually in their underwear) and swung about trying to scare you. After the freezer room was the mausoleum. 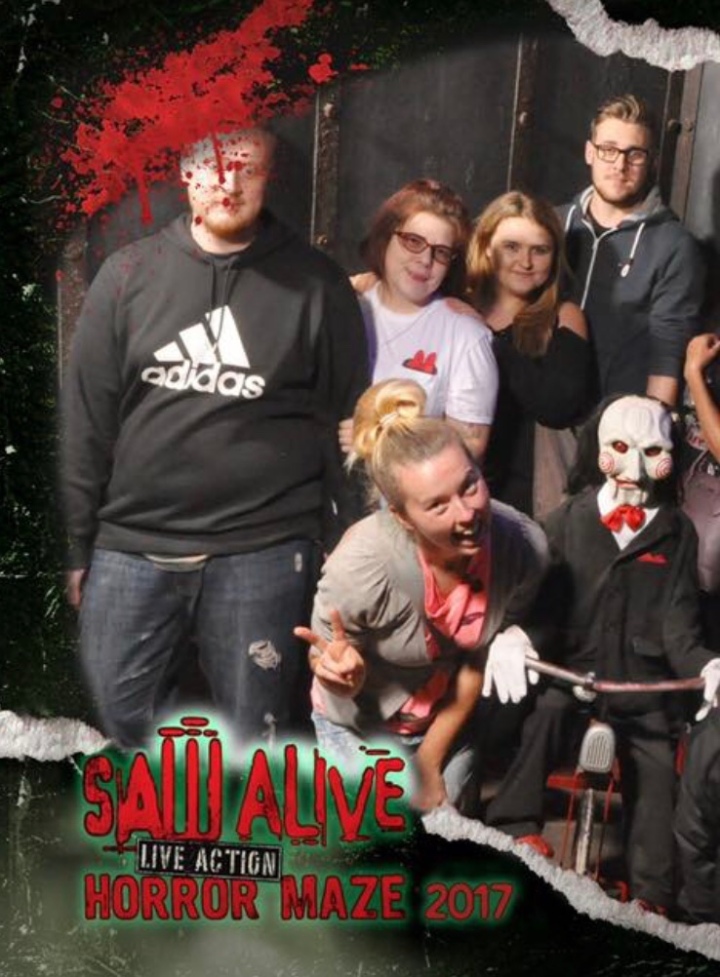 In this room there would usually be two actors at opposite ends of the chain which was getting small and smaller. The actors would run about this room banging the chains and getting right in your face. After this room was the swinging blade room. This room started off very dimly lit showing an actor tied to a bed with a beautifully themed swinging giant blade. Unfortunately this piece of theming always gets missed, but having got to do a behind the scenes tour of this maze, I got to see it in all its glory. The lights would go off and then the actor would reappear. The last room was the spinning shotgun roundabout.. This was a room that confused you from the moment you walked it. The spinning of the roundabout mixed with the circular walkway and the extreme flashing strobes made it impossible to know where anything or anyone was. The lights would also go out as the shotgun fired, adding to the fear. It was a simple yet great way to end.

When the Brave It Alone’s were introduced, Saw Alive got a reputation for being the worst one. Everyone was led to believe that anything, and i mean anything, would happen in it. Rumours were people were being stripped naked, made to eat horrible things. Amber and I both got to experience a Saw Alive Brave It Alone. Below are images of how we came out! (Excuse the arse crack) 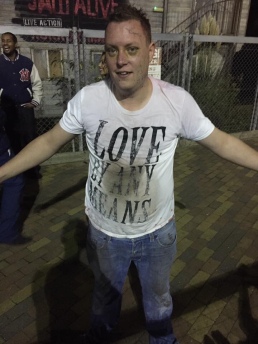 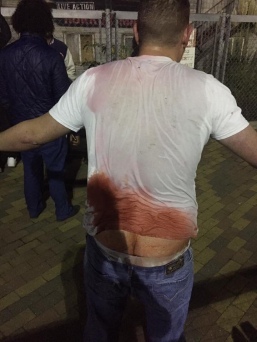 Yes, the tshirt was clean when i went in. I think having done it in both a normal and a more extreme version, I started to really appreciate Saw Alive for what it was. I do feel that in its last couple of years, the actors in this attraction really went for it and made it go out with a bang. I would even go as far as saying it was the best maze at Fright Nights last year. It was also the first ever scare attraction I did. I hated it at the time, but I don’t think I will ever forget this attraction. And I think its great that it can share the title with Thorpe Park’s other standout maze, The Asylum, as joint longest running Fright Nights mazes, each of which operated for 9 years.

Thank you Thorpe Park and Thank you Saw Alive for being a part of my scare history!