I don’t know why but I’ve found this blog post slightly harder to write than any of the others. Not because of any real reason, just that I’ve not written on for a bit and it’s hard to get back into the swing of it, so I apologise if this is a bit simplistic and more straight to the point than normal.

The weekend just gone saw Thorpe Park celebrate their 40th birthday. The park is getting older but it’s not really showing it’s age yet, which is fantastic. To celebrate, it had four things on. Game FX was still going strong in the marquee by Depth Charge, Jungle Escape was open in the old I’m A Celebrity building, Bouncezilla had sprang its way near Rush and in the evening, The Amity race track Saw Luna Cinema arrive. The weekend also saw Saw celebrating its 10th birthday too!

We had done Game FX previously so didn’t bother going in to it when we visited, and we also didn’t do Luna Cinema because, if we’re honest, we forgot it was on. We did do Bouncezilla and Jungle Escape though!

Costing £10 when booked on the day. £9 when booked online with 24 hours+ notice and £8 for pass holders, we decided to give it a go as everyone had raves about it and all the reviews from media were pretty positive. It started off a bit rough as we were told different information by staff. A manager said we had to wait 40 minutes for someone to come and let us in, while another member of staff said 20. Was this a puzzle in itself? Turns out we had to wait 10, so both lied, lol. We got let in and the ‘game’ begun. We listened to the lady who explained the story and then watched a video with the usual poke up the butt which seems to have survived the change. The acting in the video and by the actor on the day was really good. I can never fault the actors!

There were only 5 of us in total and we were split into our teams and let in to the first room. I won’t spoil the puzzles but this room and the second room were brilliant. Such a great range of puzzles. It’s just a huge shame that this is where the positivity ends. Just as you get into the whole having to solve puzzles and games, it comes to an abrupt end. That’s right, there are literally only two puzzle rooms. After your two puzzles you meet a second actor who explains that everything is a lie and that what you’ve just done is completely pointless. You then get sent through the giant inflatable and into the hill. It’s had a couple of swinging bags added and a couple of logs attached to the net to make it seem like they tried to do something with the ending.

Jungle Escape has so much potential to be a really great escape room experience but it’s just a bit naff for the second half. Do I think it’s worth the £10/£9/£8 (depending when you buy ticket or are a pass holder), honestly, No. It’s probably worth about £4/£5. I actually came out pretty disappointed, which is a shame! 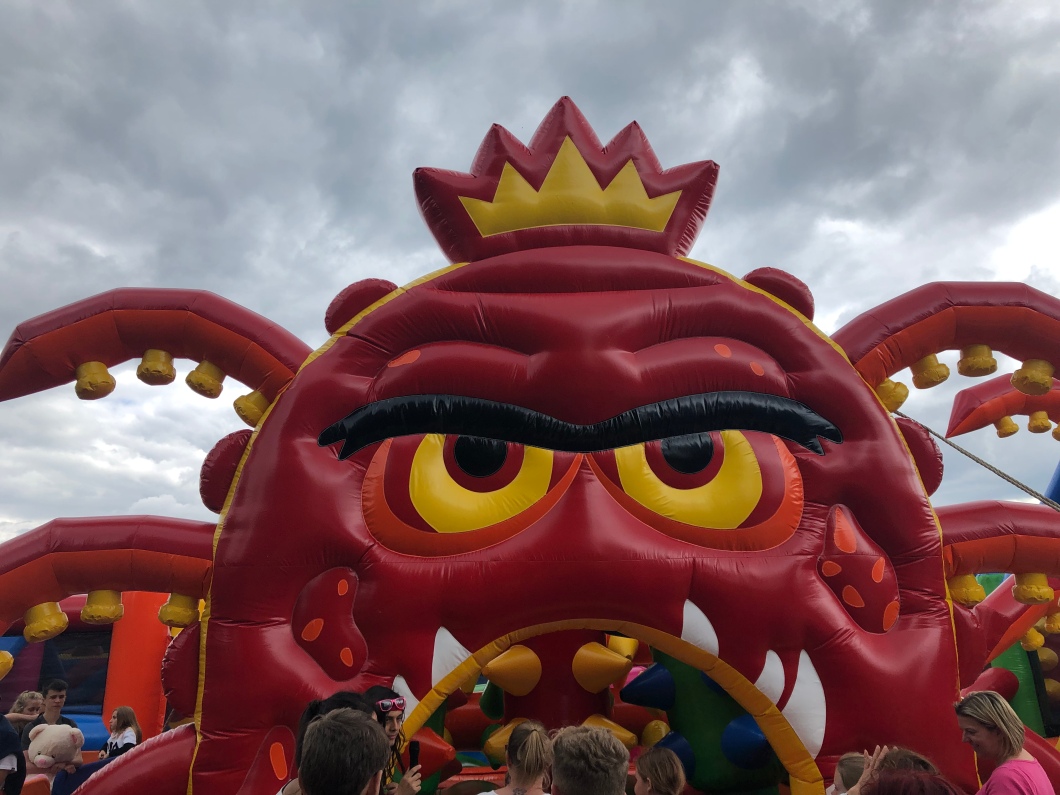 Luckily Jungle Escape was the only negative of the birthday celebration. Bouncezilla is so much fun. It’s knackering and you feel like death after you come off, but it’s highly enjoyable and just such a huge laugh, and it’s included with your park entry too! I mean, who doesn’t want to be a big kid and go jumping on a giant inflatable obstacle course. It’s bright, huge and so right for Thorpe Park it’s crazy.

As well as Thorpe celebrating, Saw The Ride was also celebrating its 10th birthday. Roaming actors were in the area and it felt like Thorpe had actually made an effort to celebrate its torture device! Plus if you were feeling brave, you could approach the actors, say the special phrase, and earn yourself a limited edition pop badge!

Overall, Thorpe Park are celebrating in style and despite a little hiccup, I think I had one of the most enjoyable days on park in a while. It was random, fun, crazy and just such a laugh. It will be interesting to see what else Thorpe Park have in store for the year and of course, Fright Nights will be approaching soon! Let’s hope Thorpe Park go back to basics and become as good as they were 3/4 years ago!