From Thursday 28th March to Saturday 30th March, I was in Blackpool celebrating my 31st (Yes i’m getting old). Obviously Blackpool Pleasure Beach was on the list of things we did, but I thought I would share my thoughts on that in a separate blog post, so this one will be about all the other things we did in Blackpool. We got there about 4pm after a trip to the local Tesco for supplies, i mean booze and made our way to the hotel and got freshened up and headed for food and then to Funny Girls!

OMFG! What can I say about Funny Girls. Its camp, its funny and just down right amazing! Zoe is hilarious and so sassy and looks stunning. The show itself was a light hearted cabaret extravaganza with a very clever mix of humour and lip sync. The venue is stunning. There are so many mirror balls and it ha a proper old school vibe. The booths towards to back and upstairs. These booths come with waiter service on the drinks. The floor between the booths and the stage can be occupied by people too. So plenty of space for people. I genuinely can’t recommend it enough. If you want a hilarious night out at low cost, than I do highly suggest Funny Girls!

After Funny Girls we sort of went on a bit of a magical mystery tour of Blackpool’s gay district. We walked past the Cock Inn Hotel which had us wetting ourselves and we went to a pub that the name escapes me. It was dead quiet in there with only some transvestites in there. It was really awkward. This pub was recommended by a lovely couple. We decided this wasn’t for us and went back to my new favourite place, The Flying Handbag. The DJ/Cabaret act was so funny and the place is just so lovely and camp. We stayed there for a good few hours. We also spied, creepily, on the hot backup dancers from Funny Girls, as it exits into The Flying Handbag. If I ever come back to Blackpool, I will now automatically go straight for The Flying Handbag as I love it.

Friday morning we got up late due to the very late night out and we headed for a decent cup of coffee. Who would have thought Costa Coffee would taste so good (Yes i’m a Starbucks fan) and we headed past the towers (Which was closed) and headed into Madame Tussaud’s. It was dead quiet! Like really dead. We were able to take out time looking round at every single wax work, try out the interactive displays and managed to get some brilliant photos. Its such a lovely place inside with many different things. It may be smaller than the London one, but its better I feel. 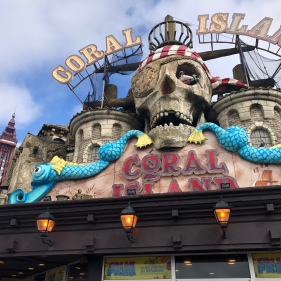 After Madame Tussauds, we popped into Coral Island as I wanted to do the Ghost Train, but it was closed, like everything else in Blackpool on a Friday. So we ended up playing on some arcade machines. After about an hour of putting 2ps into the machines we gave up and went for a walk onto one of the piers and then we hopped on the tram and went down to the giant mirror ball on the beach. Its so big and sparkly. I loved it. That evening, we decided to take it easy. We went to a lovely Italian restaurant with some incredible waiters. La Fontana is tucked away just west of the gay district but the food is stunningly tasty and the ambiance was lovely.  After we had finished, we were heading back to The Flying Handbag for some chilled drinks when someone handed us flyers for half price entry to a touring drag show called Why Isn’t Everybody Talking About Fifi? So we thought fuck it lets go. I kid you not, it was bad. The queen was so of her face drunk that what would have been a funny show turned into a desperate act of trying to hold it together. Many,many things went wrong. Its a shame as it had so much potential, but it just fell very flat. At the end, they held an auction and the same guy brought the two prizes at stupid amounts of money. The lap dance was a bit of an eyeful to say the least. After that we decided to sleep as Pleasure Beach and Pasaje Del Terror were calling us. I will be honest. I was going to do a review about Pasaje Del Terror, but I can’t actually remember much because I was slightly tired. All I can remember is that there were various horror film characters and that’s pretty much all I can remember. Oh, and I may have screamed, so unfortunately there won’t be a review from me.

Blackpool has a lot of charm to it, but at the same time its not fantastic. Its certainly a place where you have the experience you want and you make it what you want it to be. I would like to visit the place again, but I’m also like, I’ve been there now, so i’m not in a hurry to get back. Its such a weird feeling to have about place.