Just a small review today, but on Saturday we popped along to the York Dungeon for a visit and we wanted to share with you a mini review of this lovely place. Set in the heart of York, this city is the perfect place for this style attraction, especially when you consider the other options available such as ghost tours and ghost walks. The York Dungeon offers a family friendly, funny, scary exploration into the dark past of York. This 75 minute show explains about the vikings, Margaret Clitheroe, Dick Turpin as well as other wonderfully twisted characters.

You enter and wait in a very dark room. You are then greeted by a nun who explains about the vikings. The actor in this room on Saturday was wonderful. She was funny, rude, and so sarcastic. My inner bitch adored her. Our time together flew so quickly before we were ushered along as slaves to meet the vikings. In this next room, we were told about Jorvik (aka York) and the war between the Saxons and the Vikings. This scene has some clever use of screens and is very immersive. The actor was so full of energy and played the part very well. Next you go to see the Plague Doctor. This scene was very similar to the one at the London Dungeons, just with a script that matched more to York.

After a visit to the doctor, we walk along the streets of the Shambles and enter The Golden Fleece and hear the tale of the two Williams. Its quite a disturbing story, but one that is so gruesomely glorious to hear. Again, this scene is similar to the Ten Bells story in London, but without an actor. Instead, there is a screen and a ghostly apparition. After you leave the pub, you meet Margaret Clitheroe. She is the butchers wife and a saviour to Catholics. She hides them from the law. This room starts the mirror maze. Unlike London, this one actually has a bit of a story to it, so you feel an actual reason for being in it. It has different effects inside it too. Just like the London version, you get trapped inside while this is all going on and its only when the actor decides to let you out, are you set free.

After you get lost in the mirror maze, its time to visit the head’s of Guy Fawkes and John Wright. This hilarious room is a gentle break from the murder and killing for 5 minutes, before the onslaught of deadly persecution. Its light hearted, though serious, and is just a fun little scene. After this, you head to see everyone’s favourite, The torturer. The same thing happens in this as at the London one (Yes i’m comparing an awful lot to the London one). But the actor in here was both attractive and very colorful with his characterization on the torturer. It was dark, but not stupid dark, and the humour was perfect. Second best actor of the day for me. After the torturer, its courtroom time. Exactly the same happens in this one as at others (Trying so hard not to say London) so will skip it in detail. Its just a fun room. Next was THE highlight for me, The Executioner. I didn’t understand a word this guy was saying. He had a very strong accent, and i’m a southerner, so its hard to understand for us. Luckily I had a translator. lol. He was super energetic, dark, hilarious, interactive and it was just wonderful. Helped he was attractive too, i won’t lie. My favourite scene, by miles (Sorry everyone else). Next up was the last main show piece. The Highwayman. This was very simple, yet very clever. I won’t go into detail, but its very good. Lastly, The Tavern. Its tiny, but oh so cute. 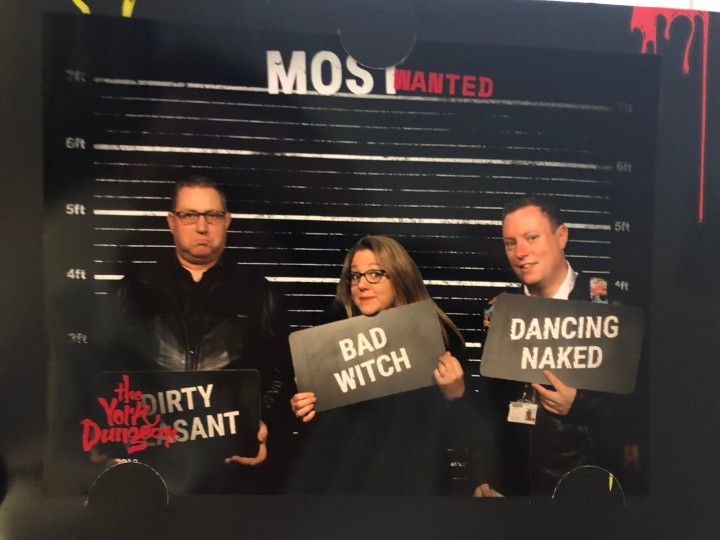 Basically, its awesome. Its a smaller group that the other one that is down by a river in the south, as the rooms are a lot smaller, but the tightness and smaller groups make this a very cute and fun Dungeon. Thank you for having us York Dungeon. We loved every bloody second!

We wish we could spend the day at the @londondungeon but we have to work 😢 What’s your favourite Dungeon in the UK? #thedungeon #londondungeon #scary
The wonderfully scary @ghoststoriesldn is now in tour and we can’t wait to see it again! #ghoststories #theatre #show #scary
This appeared on my memories today. It’s our Dom and Amber exiting from their Brave it alone in the Cabin In The Woods maze at Thorpe Park! Did you get to experience any of the face it alone experiences the park used to do? #cabininthewoods #thorpepark #frightnights #faceitalone #braveitalone #extreme #haunt #scare #scaremaze
How many coasters from @pleasure_beach can you see in this photo? #blackpool #pleasurebeach #rollercoaster #themepark #amusementpark #rides
It’s time to start thinking about those Valentines spooks! @scarekingdom @screamfactory_ and @yorkshirescaregrounds are all open that weekend along with @pasajedel_terror which reopens for the 2020 season. Our blog post has all the information you will need! #scarekingdom #yorkshirescaregrounds #screamfactory #scary #pasajedelterror #valentines #scareattraction #haunt
We miss @lisebergab so much. Was so great to get there for the first time last year! #liseberg #sweden #themepark #rollercoaster #helix #lisebergbanan #uppswingt
With the New Year now in full swing and award season only a couple of weeks away, we decided to do our own version without the trophies. Our New Years Honours list is now up on the blog! #awards #honours #scare #themepark #rollercoaster #rides #scaremaze
Daemonium at @hydeparkwinterwonderland was an experience. It’s tacky, but fun tacky! #winterwonderland #hydepark #london #daemonium #ghosttrain #chainsaw #spooky #ride
For today’s #AdventCalendar we are celebrating the amazing @scaremaze ! We feel this is the perfect way to end our Advent Calendar! #walsallscaremaze #scary #spooky #christmas